Regional cork in the spotlight 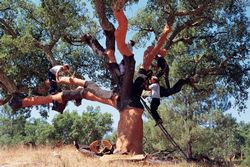 Regional cork in the spotlight

Since 2012, Diam Bouchage has campaigned with regard to French cork and to maintaining and developing a sector that is at the heart of our regions. A pioneering move where cork makers work alongside cork farmers, associations and cork oak forest owners to offer winemakers closures from cork oak forests from their own region.

In June, the cork harvesting season, we once again had the opportunity to raise public awareness and increase the number of winemakers who are in favour of using French cork!

Vives (66), the Mediterranean Institute of Cork and the city municipality organised VIVEXPO, the biennial on cork and Mediterranean Forest. Conferences, tastings, sweet wine or Vin Doux Naturel contests and cork harvesting were all part of the programme during the three days of the exhibition. The Diam team was present and also paid particular attention to the conference theme: ‘The economic future of our cork forests’.

Var (83), to promote the approach of using the region’s cork among the general public and journalists, the Diam team attended the wine festival held in the Var on Notre-Dame-des-Anges site.

The Association des Vignerons du Var Centre was able to realise its recognition project be means of a Complementary Geographical Designation to be known as the AOC Côtes de Provence 'Notre-Dame-des-Anges'.

At the end of the month, yet another remarkable venture was held at the Domaine du Pas du Cerf at La Londe Les Maures (83). Diam Bouchage and Estandon Vignerons, who have entered into a partnership to revive the exploitation of cork in Provence, hosted the 2nd edition of the ‘Liege de Provence’ event.

All the actors of the cork industry were present: vintners from the Estandon group, the ASL – Forest Management Association, the Diam Bouchage team and a high turnout of press.

After the speeches from the institutions involved, the group experienced the cork harvesting technique in the Massif des Maures, followed by a tasting of Estandon wines sealed with Diam Provencal cork oak closures.