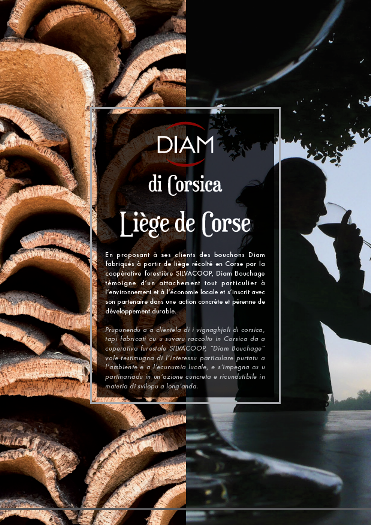 Committed to the development and use of French cork, Diam Bouchage, in collaboration with Silvacoop, maintains and develops the cork sector in the heart of Corsica. As a unique Corsican forestry cooperative it intervenes throughout the Island associating the management of 40 owners for 1,250 ha.

Diam di Corsica is the latest addition to the French regions used in the manufacture of Diam closures. The 24th of January 2017 in San Giuliano, to officially launch this new product, Diam Bouchage and Silvacoop invited the entire sector to its presentation of its approach. Agricultural decision-making institutions and wood and forest cooperatives were present: Office of Agricultural and Rural Development in Corsica (ODARC), Regional Federation of Agricultural Cooperatives (FRCA), Union of French Forestry Co-operation (UCFF), Corsica Forestry Co-operation Group (GCF)…

This partnership with Silvacoop, initiated in 2016, is part of a national approach.

Pioneers in the domain, cork makers work alongside cork farmers, associations and cork oak forest owners, to offer winemakers closures from cork oak forests made on their own land.

Diam Bouchage has already taken this approach in the Pyrénées-Orientales region, which also houses its headquarters in Céret in the Roussillon region. A first partnership was established with the Mediterranean Institute of Cork, in 2012, followed by Provence the year after with the Subracies Varoises association.

With over 350 tons purchased in France over the last 3 years from Roussillon and Provence, Diam is the leading cork buyer in these regions and probably in all of France, where cork oak is spread over a surface between 50 and 100,000 Hectares. In a 4-year period, Diam has multiplied by 20 its cork purchases in French regions, sustainably supporting the entire cork sector.

By offering its customers corks made from cork exclusively harvested in different French regions, Diam Bouchage confirms its long-term commitment: more information about all our actions here.

Many winegrowers have already adopted our corks. Our corks associate the use of a regional material with a particularly rewarding and identity-based approach. During the first quarter of 2016, more than 2.5 million ‘regional’ corks were marketed in France by Diam.